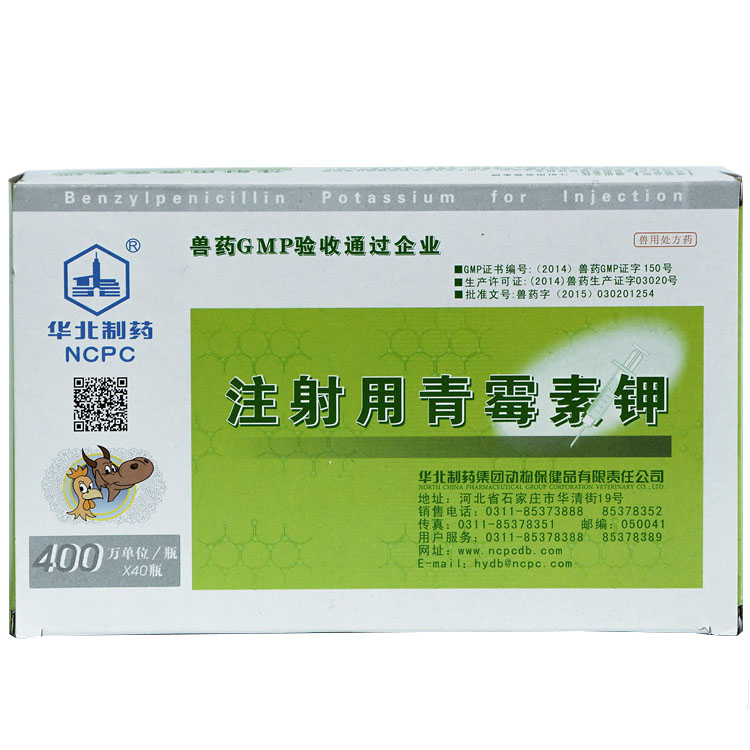 Before use, add sterile water for injection to dissolve.

Pharmacodynamics Penicillin is a bactericidal antibiotic, antibacterial activity is strong, its antibacterial mechanism is mainly to inhibit bacterial cell wall mucins synthesis. Sensitive bacteria in the growth stage are highly fragmented and the cell wall is in the stage of biosynthesis. Under the action of penicillin, the synthesis of the sticky peptide can not form the cell wall, and under the action of osmotic pressure, the cell membrane ruptures and dies. Non-growth and reproduction of bacteria, this time without the need for cell wall synthesis, penicillin can not afford bactericidal effect, should not penicillin such “breeding season bactericide” and inhibit bacterial growth and reproduction of “fast bacteriostatic agent” (such as fluorobenzene Nico, tetracyclines, erythromycin, etc.). The latter makes the bacteria in a state of growth inhibition, resulting in penicillin can not play a role.

Penicillin is a narrow-spectrum antibiotic, mainly to a variety of Gram-positive bacteria and a few Gram-negative bacteria. The main sensitive bacteria Staphylococcus aureus, Streptococcus, Erysipelomyces, Corynebacterium, Clostridium tetani, actinomycetes, Bacillus anthracis, spirochetes and so on. Mycobacterium, mycoplasma, chlamydia, rickettsia, nocardia, fungi and viruses are not sensitive.

Penicillin a small part of the liver metabolism, most of the prototype excretion. In normal circumstances, 50% to 75% of renal excretion, of which 90% through the renal tubular secretion, due to the rapid discharge, so eliminate the body faster. Penicillin plasma protein binding rate of about 50%. Short half-life, small differences between species, all livestock half-life of 0.5 to 1.2 hours. Apparent distribution volume is also small, usually 0.2 ~ 0.3L / kg, higher plasma concentrations, tissue concentrations lower.

⑴ penicillin and aminoglycoside combination can increase the concentration of the latter in the bacteria, showing a synergistic effect.

⑵ macrolides, tetracyclines and amide alcohols and other fast-acting bacteriocides on the bactericidal activity of penicillin interference, should not be combined.

⑷ amine and penicillin can form insoluble salts, can delay the absorption of penicillin, such as procaine penicillin.

[Role and purpose] β-lactam antibiotics. Mainly used for Gram-positive bacteria infection, also used for actinomycetes and leptospirosis and other infections.

Before use, add sterile water for injection to dissolve.

⑵ for some animals, penicillin can induce gastrointestinal infections.

(1) penicillin potassium soluble in water, unstable aqueous solution, it is easy to hydrolysis, hydrolysis rate increases with temperature and acceleration, so the injection should be prepared before use. Necessary preservation, should be placed in the refrigerator (2 ~ 8 ℃), can be stored for 7 days, at room temperature can only be stored for 24 hours.

⑵ should understand the interaction with other drugs and incompatibility, so as not to affect the efficacy of penicillin.

⑶ high-dose injection may appear hyperkalemia. On renal dysfunction or heart failure patients will have adverse consequences, the adverse effects of potassium on the heart more serious.

⑷ treatment of tetanus should be combined with tetanus antitoxin.